The Trojan War comes to completion, and Odysseus sets sail with the Gods on his side. But first, he must face many dangers, evade many temptations, and come face-to-face with the Lord of the Underworld himself to learn of a horrible plot that is about to be unleashed by the Titans upon an unsuspecting world... "Sing the Rage, Goddess"! 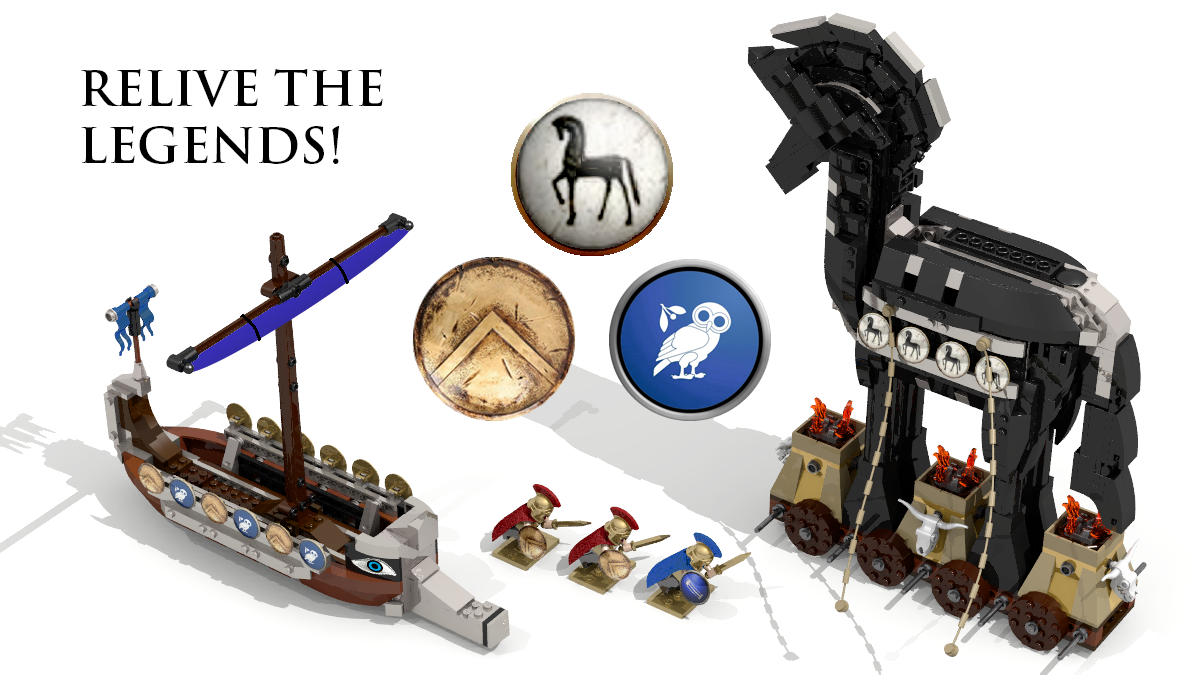 Hide four brave soldiers in the Trojan Horse... They can peer out to await their moment! 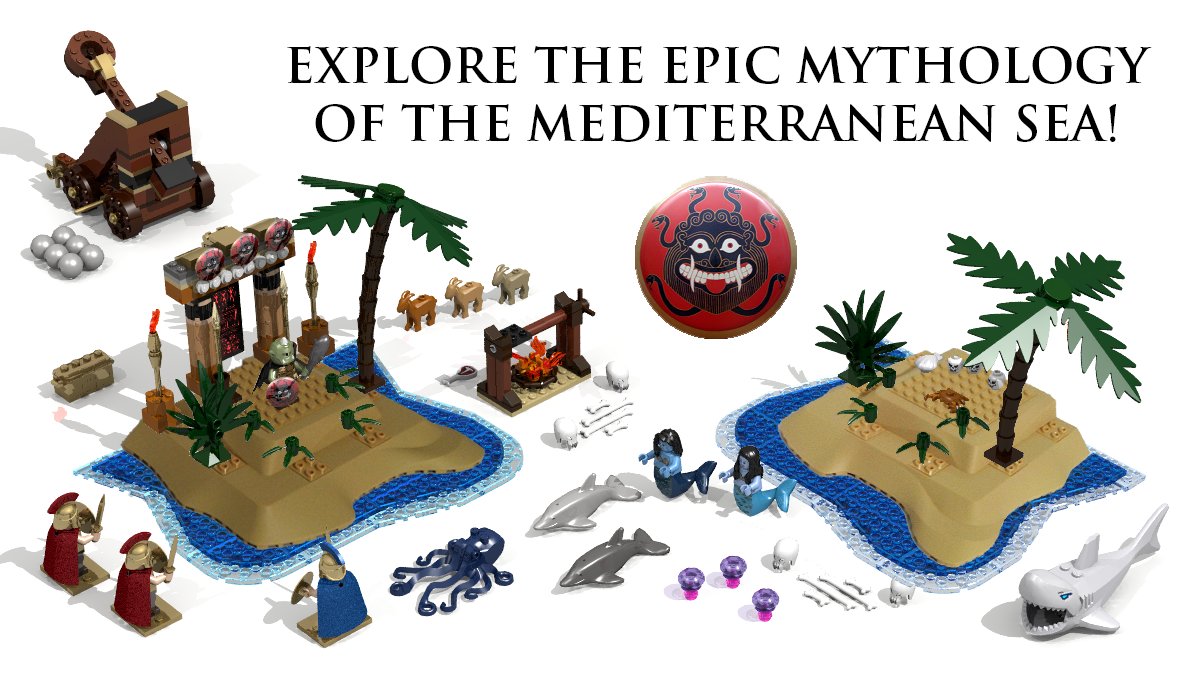 Explore islands of fantasy and temptation... Tie Odysseus to the mast for the Siren Song! 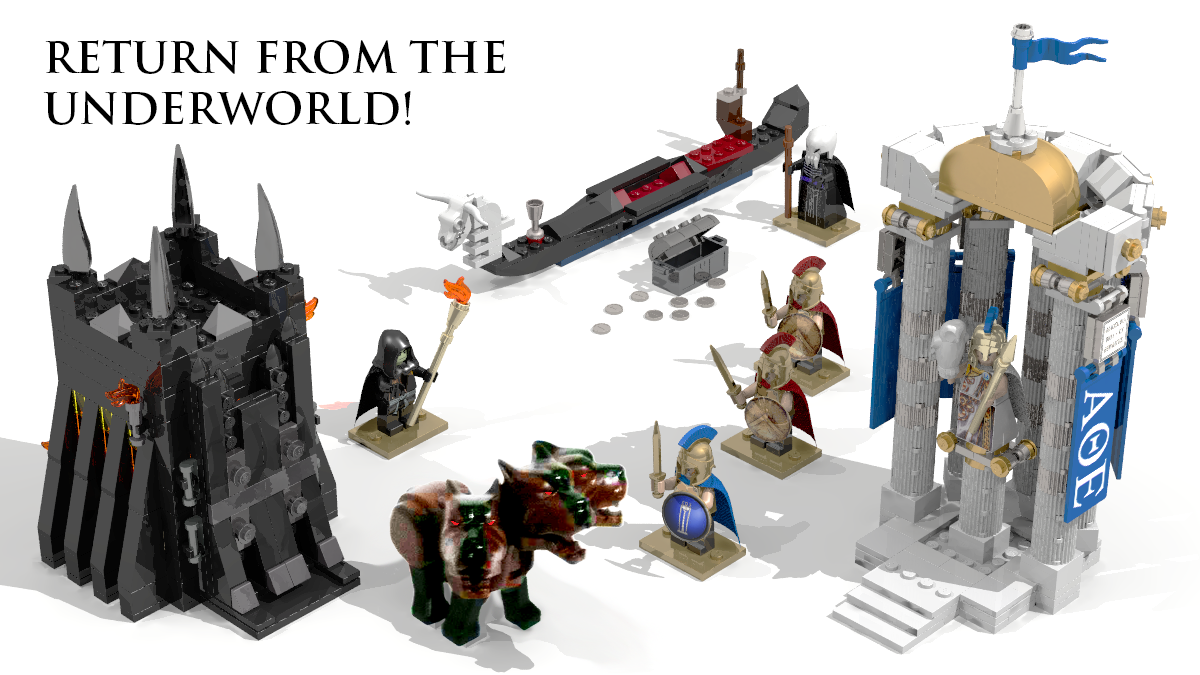 Cross the threshold of the dead... Learn critical secrets from the shades of the departed! 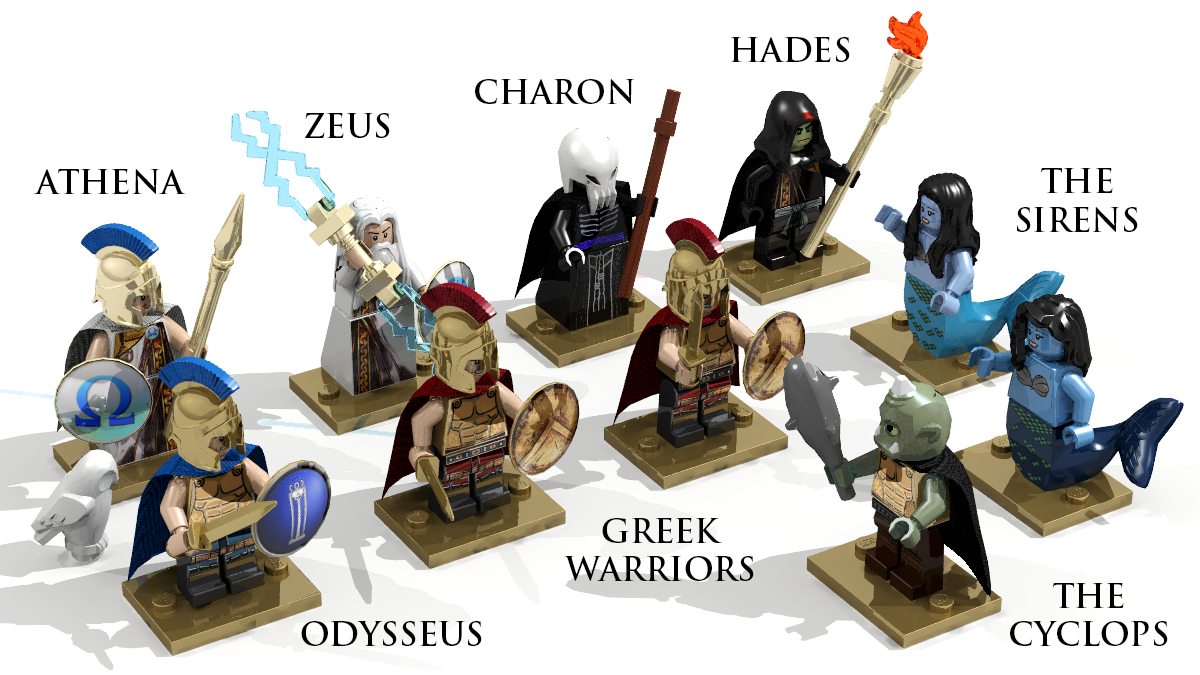 I hope you like this set... After all, what good are Ancient Gods if you don't have any heroes and adventures to get them involved in, right?! Here you get the Gates of Olympus and Hades, the Guardians of the Abyss, the icons of Civilizations, and all of the greatest moments from the Iliad, the Odyssey, and the Aeneid! The world is yours!

As soon as you have done that, you are ready to continue your journey onward to Civilizations and Empires, Level 3: Ramesses The Great Forges the Alliance...

This design includes 6 extra Athenian shields, 8 extra Trojan shields, and 10 extra Spartan shields, so you can equip an entire phalanx of auxiliary troops!

I purposefully made the Greek banners look like fraternities, partly because there are lots of cool movies with the fraternities as heroes and anti-heroes and as the underdogs. In fact, the reason fraternities have Greek letters in their names is because they wanted to style themselves after warriors in factions or city-states in the Ancient World.

The motto of the warriors who fight on Athena's side is "Philosophia Biou Kubernetes".

Odysseus is from the small far-western island of Ithaca, but since he fights under the protection of Athena, he also can proudly carry the owl shield of the Athenians. This also allows us to simplify the map a little bit, and focus the story on the three most famous city-states: Sparta for war, Troy for wealth, and Athens for science!

I'd say this is the most epically-accurate Trojan Horse ever done in Lego. According to the legends, the horse was constructed from the partially-burned hulls of the Greek war-ships in just three days time, and so everything is built out of broken and fire-blackened prows, planks, hulls, and masts.

The Greeks didn't build the wheeled part, because that would have made their ploy too obvious. It was intended to look like an offering on the beach to the gods for smooth sailing home. The Trojans were tragically doomed by a curse, and so they took it in, and started feasting and drinking, putting sacrificial bulls on the altar fires as offerings for their imagined victory.

I based it partly on the well-researched concept art and reconstructions created for the 2004 movie Troy, which are now officially installed at the real archaeological site of Troy on the Eastern Aegean coast. But I gave mine more realistic overall proportions of a horse, and generally modeled it after the stylized way that horses are depicted on Ancient Greek murals and vases.

In the epic, the Cyclops was essentially living in the Stone Age or Neolithic Era, but his contact with the Titans has upgraded him to the Early Bronze Age, with a little Minoan-style palace facade.

Also, the Sirens originally had the bodies of birds in the myths, but somewhere along the way, Western Civilization unanimously agreed that they would be Mermaids instead, so I went with that!

Hades was the ruler of the Ancient Greek Underworld, and he had power over the ghosts or shades of all dearly departed mortals. He was not an evil figure at all, but sometimes a bit jealous and coldly Machiavellian, a bit like in the Disney Movie Hercules. The real villains here are the Titans, who represent chaos and the forces that can destroy all civilizations!

Athena was the most important divine figure in the Epic of the Odyssey, appearing in disguise as an old man named Mentor. This gave rise to our modern concept of a Mentor, and forms one of the most classic examples of "the divine guide" in the timeless narrative archetype of "The Hero's Journey". George Lucas drew very directly on these concepts in designing Yoda, and in writing the story-arc that spans the Original Trilogy, and in creating the overarching themes of his complete nine-part Star Wars Saga!