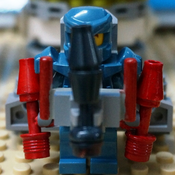 In the near future Doc Terror, and his cyborg companion, Hacker, unleash their forces to conquer Earth! Only one force can stop this evil: a handful of brave men. In specially created Exo-Frames, they can be transported anywhere to fuse with incredible assault weapon systems, beamed down from the space station Skyvault, becoming man and machine, Power Xtreme! Max Ray, brilliant Sea Operations commander. Jake Rockwell, rugged Land Operations specialist. Ace McCloud, daring Air Operations expert. Whatever the challenge, they are ready—the Centurions!

The Centurions is a 30 minute animated series aired in 1986. This project is the Lego interpretation of Centurions to celebrate their upcoming 30th Anniversary in 2016. The set contains of Skyvault, Crystal Kane, Max Ray in Tidal Blast, Ace Mcloud in Sky Knight, Jake Rockwell in Wild Weasel.

Skyvault can be seated by Crystal Kane (Photo 1).

The assaults weapons Tidal Wave, Sky Knight and Wild Weasel are similar to the ones used in the TV series (Photo 3).

Additional assault weapons system plus Doc Terror would be made available upon 10,000 supports.

This build needs your help to be realised!!!