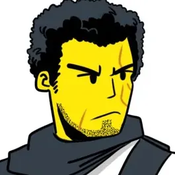 By ATSY
37 comments
The Space Western Saloon is part of a colony founded by the classic space astronauts and left to fend for itself. Victor Quasar and his mechanic Sally "Screwball" return to defend this colony and its sought after natural crystals from the notorious alien outlaws, The Coyote Gang.
I had a lot of non-LEGO inspirations for this set, like Cowboy Bebop and Wild Guns on the SNES, but at its core, this is my love letter to the LEGO space themes of my childhood. The set features a few references to themes like Space Police, Blacktron, and obviously Classic Space. As a kid, I always latched onto "the green guy" whenever there was a color-coded team in a LEGO set. Making the main character of this set the green astronaut is my way of giving the green guy the spotlight he deserves!