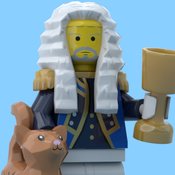 By Lord James
70 comments
It was the Age of Wigs. Mighty empires clashed on land and sea for dominance of the lucrative wig market. After years of stalemate, one ascendant force has gained a tenuous hold over the vital trade routes and constructed their impregnable citadel, Crown Dominion Fortress. The Viceroy and his trusted inner circle have been charged with a solemn duty: to protect the supply of luscious wigs that society desperately needs for work, leisure, and attracting mates. The very fate of the empire hangs in the balance. Yet storm clouds gather on the horizon; their fierce rivals, the Greencoats, will stop at nothing to seize all the wigs for themselves! Now you must choose who will prevail. Control the wig trade; control the world!
Now for the part that reads like a press release:
With its fun play features, innovative design, and historical realism, Crown Dominion Fortress is the perfect addition to any Lego collection. The striking, angular appearance of this bastion fort is unlike any set that Lego has ever produced, and the numerous callbacks to classic sets are certain to please. The nine minifigures in this prototype are based on the legendary never-released theme, Europa, which Lego enthusiasts have been awaiting for decades.
This is more than just a display piece; the building experience is a rewarding challenge, and the structure, consisting of 10 movable sections, is durable and internally well-supported, so younger children can play for hours while the fort remains in good working order. The crane can be positioned to hoist barrels of munitions to the upper levels as well as to pull cannons up the ramp in order to defend the base against Greencoats or any other adversaries imaginable. The fort also includes two jail cells and ample storage areas for stockpiling wigs and other treasures. The roof of the gatehouse can be removed easily to reveal the viceroy's bureau, containing a handsome pedestal desk and chair, bookshelves, maps, light fixtures, and more.
Technical details:
This prototype contains 2,992 elements (Studio 2.0), around a thousand of which are 1x2 tiles or smaller, so the total volume of the set is reasonable relative to the part count. Many large supporting bricks can be replaced with panels of similar dimensions to reduce the mass without losing any stability. The colors (yellow, white, and bright light orange) are reminiscent of classic Lego sets as well as real-life forts such as Christiansværn (Christiansted, US Virgin Islands) and Forte de São Tiago (Funchal, Madeira, Portugal). Other historic forts that influenced the design of Crown Dominion Fortress include Castillo de San Marcos (St. Augustine, Florida, US) and Fort Zeelandia (Paramaribo, Suriname).
The foundation is a symmetrical irregular pentagon. The interior sides have lengths of 18 studs (x2), 26 studs (x2), and 31 studs (x1). To save on the part count for the final product, each side can be reduced by the same length and still maintain a uniform, integrated appearance. The five interior angles are each 108 degrees, leaving corner gaps of only 0.25 millimeters or less. The sides of the bastions align with the flanks at 9 degrees from a straight line (171 degrees) to form a consistent outer wall. In the prototype, these sections are not connected, although they can be easily adjoined by 1x2 hinge bricks at the level just below the row of white slopes. Alternatively, to maintain modularity, the sections can be connected internally using holders and sticks or - better yet - with magnets.