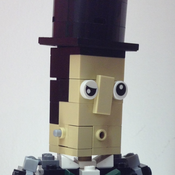 I bought a bag of Lego pieces from a charity shop for my three year old son Jasper. I gave him all the big pieces and hid the rest so he didn't eat them. We found the little pieces again when he was five, so we sorted them by colour and found about sixty light tan coloured bricks which matched his Star Wars Lego.  We set a challenge to build with just these colour blocks.

The inspiration for an owl came from the piece that looked like a beak. The challenge was to build the rest of the owl to match the beak's scale. After several re-builds we progressed the little owl as far as we could. If we had used different coloured pieces we could have improved the wing attachments with a ball connection, however, this are not available in the light tan so we stuck with what we had. Key features are:

This is a small model that fits in a matchbox. This was all getting very tricky with such a tiny body, at which point we ran out of both bricks and patience and started on the stand. We rummaged through our combined Lego sets and found some neutral light grey pieces to create a round flat base that tapers up to a tiny perch.

After building in Lego, I modelled it again in LDD and discovered the wing connections were not strictly Lego compliant, so I modified the wings and also made them look more feathery. The spec is:

I hope you can share our journey and can find a little room on your shelf for this ornament.