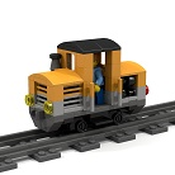 The idea behind this project was to create a less streamlined, but rather a classic and characteristic passenger train set. Being a passenger train the playability might be different than that of a cargo set, however with 8 colorful characters (left to right below) I think it can deliver a lot of fun to the whole family:

Some words about the train. First of all it’s huge compared to the passenger trains LEGO released to date. The engine is almost 34 stud long and the passenger cars are 32 stud long if we measure them from corridor end to corridor end. The engine is PF equipped with a train motor, an IR receiver, a battery box and an IR remote control. Each end of the engine has enough room to seat the train driver. Behind each windshield a train control panel can be found.

The passenger cars are almost identical, however the first one has seats heading to the center of the car and a table between the middle seats, and the other one has opposing seats.The fake train doors are grey for the sake of the easy recognition when arriving at a stop or a station. The roof sections can be removed and allow an easy access to the minifigs.

The train stop is equipped with all the necessary goodies. Ticket can be purchased by using the vending machine, train info can be studied on a huge illuminated billboard (no sticker graphic yet), and the arriving train is also displayed (no sticker graphic yet) above the platform. The small structure has smoked glass walls and roofs and 3 raised seats.

This is my idea and I hope you will like it!