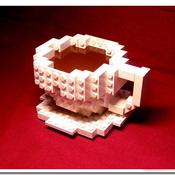 [Body]
-Wedge plates were used to represent the unique curves of the violin.
-The side wall(rib) was designed with the 'brick with knobs' in the way stud was seen.

[Peg box and Scroll]
-Wedge plates and round plates were used to express peg box and scroll.
-For Peg, # 75904 Hammer was used.

[The story of this creation]

It is not an update, but just the story of this lego violin.

In 1993, when I was 13 years old, I made a Lego cello.
At that time, I just outlined what I saw and created it.
I had to make the lego cello with black brick which was the most of the bricks I had.
The string was represented using the '# 3228 straight rail' included in the 6542
set(Launch & Load Seaport).

It looks very grim now, but it is a very meaningful work for me.
Twenty-five years later, with LDD, I was able to create a stringed instrument again, using a variety of new bricks to create a more natural curve.

I think this creation will be a very meaningful creation for Lego fans who love music.
Thank you for your interest and supports.