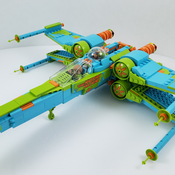 By Tall Guy Brick
62 comments
Embrace your inner artist with this unique, floating LEGO sculpture!
The idea to build this model came after I challenged myself to design something with LEGO that appeared to defy gravity. After some thought, I focused in on the idea of liquid pouring from a container...and then quickly realized how challenging of a task I'd signed up for. It took some clever engineering, several prototypes, and lots of redesigns, but I was able to create a build that I am proud of. I hope you enjoy viewing it as much as I enjoyed creating it.
I settled on the theme of "Painting A LEGO Brick" because it tied together two important subjects: Art and LEGO. Whether it is a child building their own creation or an adult building an official LEGO Mosaic set, each is engaging in a form of art. And while art comes in many forms, this Idea's build depicts paint being splashed onto a 1x4 buildable brick base while a nearby brush begins painting the brick itself. It is intended to be a dynamic scene while at the same time, paying homage to the bricks used to construct it.
The mid-air pouring affect is achieved through a combination of traditional bricks and Technic pieces. The "paint" is rigidly held to the base and requires no transparent parts for support. This helps ensure the paint appears to be floating no matter the viewing angle. The model shown in the photos is not a digital render, it was built using currently available LEGO bricks.
Whether displayed on a bookshelf, desk, or artist table, this gravity-defying set would make a wonderful addition to any LEGO collection.