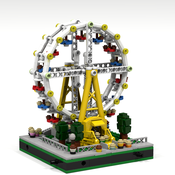 A new jail with an exercise yard has been built in Lego City, but I think they still have some stuff to improve!

The jail is not well-guarded, so one of the prisoners named Rob Gold has managed to escape through a tunnel he has digged from his cell. And he is now escaping outside the jail, but the police dog has spotted him.

Inside the jail, a beautiful female visitor has managed to smuggle a screwdriver into the prison and is just handing it over to her criminal brother.

Three of the prisoners are having their daily exercise in the exercise yard. They are guarded by a police officer with a billy club. If the guard falls asleep the prisoners are chained together with chains to prevent them from escaping, but will this help?

It is obvious that many prisoners have had their exercise there before them from the well-marked path on the ground in the exercise yard.

I hope you like this set as much as I do.