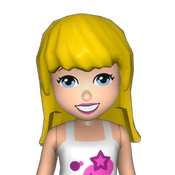 By Grobi1971
12 comments
The Insectoide Spaceship is a bio-inspired spaceship which is piloted by an astronaut who is ingested into the spaceship's head. It is steered by this bionically adapted astronaut by pure intuition. The head of the spaceship is equipped with several instruments enabling insect-like vision as well as other senses. The propulsion is delivered by a single ultra-high density supraplasma engine in the corpus. The ship can extend 4 legs for support on solid planetary terrain.
Amazing how organic a model can look like consisting of relatively few mostly rectangular bricks! When I discovered how many grips can be fitted onto a LEGO curved track, I was intrigued by the idea to use it as the central part of a bio-inspired spaceship. During building, an insectoide form developed and at a certain point I realised that the logical place for an astronaut would be to let her slide into the head of the insectoid. The model combines a lot of classical space parts with several modern elements.