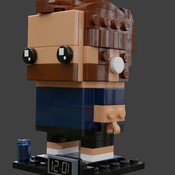 "That's another fine mess you've gotten me into." - Oliver Hardy
Introducing the Laurel and Hardy Brickheadz (which was made from over 170 pieces), to pay tribute to the two best comedic duos of all time. If you want to view the project yourself, then here's the link to it:
https://www.mecabricks.com/en/models/8xaDDVpzaB7
Q) What is it..?
A) Well, it's a updated version of Laurel & Hardy. The last submission had expired by the time i finished the improvements on the Brickheadz.
Q) Why did i build such a thing..?
A) Well, i thought, as a tribute to what i think, personally in my opinion, the greatest comedy duo to walk the earth and also the fact that it has been almost a hundred years since they first made their film, i decided to recreate them in the form of Brickheadz
Q) Why did i believe this would make a great LEGO set..?
A) I thought that the idea of having Laurel & Hardy as Brickheadz and not LEGO minifigures or re-creating a scene from one of their amazing films in LEGO form, was excellent in two ways: 1) It was easier for me to do this as i already own a few Brickheadz, so i could just work on the project using them as a example. 2) My opinion is that they look ten times better in Brickheadz.
Q) Why are they not coloured..?
A) They're not coloured, as it thought it would look better if they were made in black and white (it's supposed to look black and white), just like the films.
HELP SPREAD THE WORD: https://twitter.com/explore