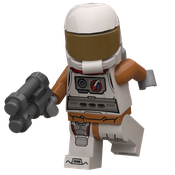 Oh... It's you. It's been a long time. How have you been?
Introducing the Aperture Science Enrichment Facility, complete with artificial intelligence cores, test elements, and deadly neurotoxin, now rendered in LEGO! This custom set idea recreates a selection of iconic settings and objects from Portal 2, with an articulated model of GLaDOS at its center, making a wonderful playset and display piece.
Portal has been one most critically and culturally acclaimed video games of the past decade, and has been as huge personal influence on my own upbringing and artistic style. With Valve's recent decision to delve into game development once more, now seems just an opportune time as any to celebrate this imaginative setting.
The Model
Designing this model was an exciting challenge of mixing aesthetic design and structural engineering (yay!) that finished in what I hope is a really nice looking and fun idea. Encouraging people to take inspiration from their favourite stories, childhood experiences, or beloved media, and create some new, fun, and imaginative is a concept I feel should really be celebrated and shared, especially if it encourages other to do the same themselves.
So I can only hope that this model does the same for you. Enjoy!