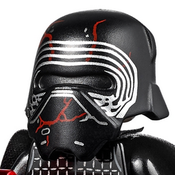 What is it ?
It is my third modular old house ! With a garden, three floors, a staircase and a chimney.
Four figures : a man called Bruno, a woman called Solène, Bruno's dog, Solène's cat. Solène is pregnant but you can’t see it yet.
I have always the same problem : Most of our LEGO sets are built, and we don't want to destroy them, so each time it's hard to have enough bricks to build on. Nevermind !
My former house was 360° with walls all around, but it wasn’t perfect and it was too small.
The previous one was more harmonious but the wall was missing on one side.
None of them had a front door that could be opened and closed.
Both of them had two trees embedded in the wall around the (missing) front door, like in an old church that I visited in England.
This one has walls all around, a true front door, only one tree but it’s higher and there are two swings in it.
My previous houses were decorated in red and blue, inside, because I decided that red was Bruno’s favourite color and blue was Solène’s favourite color. These two colors are a reference to two characters from a movie that I particularly love.
I called my second house « Red’n blue house », but outside, it wasn’t red and blue.
This one has red and blue elements outside : the roof, the swings, some of the windows, the mailbox …
Solène and Bruno both love music, like I do. He plays the guitar, she plays the piano.
They like to read books.
They like to drink coffee, so do I !
Inside:
First floor, a living room with two sofas, a table, a bookshelf, two additional small tables, a kitchen, decorated with cushions, candles and flowers.
There is even a broom cupboard under the stairs.
Second floor, a bedroom with a double bed, a patchwork blanket, a piano, a guitar, shelves, a fireplace, a bed and a changing table for the future baby. It will be a girl !
Third floor, under the roof, two desks, the blue one for her and the red one for him. A bathroom with a bathtub, a sink, a toilet.
Outside:
The chimney and a windw are half-timbered, there is a garden with pumpkins, an apple tree, a climbing rose bush, a fountain and little rabbits hidden in the vegetation. There are flowered balconies. There are stars on the roof to tell that they are happy.
Why did I build it ?
I wanted to improve in building houses. This time I managed to get the house I wanted, with cool details, despite the lack of bricks.
Why do I believe this would make a great LEGO set ?
I think this house tells a story, so it can make you dream ! My daughter and my nieces love to play with it !