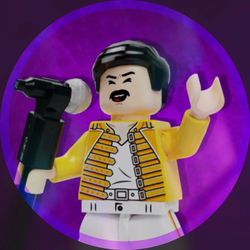 Based on the legendary rock band Queen, you can now gather your minifigures for the ultimate LEGO concert. Join the four band members and get ready to rock the world!
I am a huge fan of Queen and have been a LEGO collector since I can remember. I thought it would be a great idea to combine the creativity in Queen’s music, with the creativity in LEGO.
With 'Queen Live Concert' you can recreate your favorite Queen-moments, or get creative and make your own! This set includes a fully brick build stage with all the instruments and equipment required for the best live performance. Also included is a build for a backstage area with room for the band to prepare for the concert. Along with the four band members, the set also includes the robot Frank, who is known from their album News of the World. Expand and create your own shows and beautiful outfits.
Included is 8 instantly recognizable minifigures of the four band members from both the 80s and the 70s. John Deacon, Freddie Mercury, Brian May and Roger Taylor. Chose between the outfits and design your own glamorous looks. Extra head and hairpieces for Brian and Roger are included to update them to their modern day looks.
Freddie Mercury comes with his iconic microphone stand and a grand piano.
Brian May has his famous Red Special guitar and three Vox AC30 amplifiers.
Roger Taylor comes with a full drum kit and drumsticks