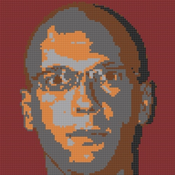 How would you like to revive your memories of your visit to Budapest by building a miniature version of the main attractions of this gorgeous city? In 2015, more tourists visited Budapest than ever, and I'm pretty sure many of them would have loved to take this mini city with them!

I designed this project according to the conventions established by LEGO's Skylines series. I think it would look nice next to the similarly scaled versions of other cities LEGO has already recreated.

It was a real challenge to find sufficient room for all of the buildings on this 4x32 stud micro-universe. To be able to display at least four landmarks, I finally decided to add an extension at the back to accommodate the tree-covered Castle Hill and the Fisherman's Bastion on top of it. Similar extensions are used in the New York and the Berlin sets to fit the Statue of Liberty and the Reichstag building respectively.

I reconstructed my home city from a total of 372 bricks, using 9 different colours.

The following landmarks are represented:

Located on the banks of the Danube, the Hungarian House of Parliament is the third largest parliament building in the world, and it was inspired by the English Houses of Parliament.

The emblematic Chain Bridge was the first permanent bridge connecting the Buda and the Pest side of the city. It is now a major tourist attraction and an important walkway between the city centre and the Castle Hill.

Constructed at the end of the 19th century to commemorate the 1000th anniversary of the Hungarian state, this glowing white building sits proudly above the Danube on the Castle Hill.

Budapest's largest public square is located next to City Park. The main attraction is the Millennium Monument which stands in the middle of the square. A tall central column is topped with a statue of the Archangel Gabriel.

Thank you for your interest, and please remember to support this project!

Want to see more? Check out my larger scale LEGO models of other Budapest landmarks such as the St. Stephen's Basilica and the Liszt Academy of Music.