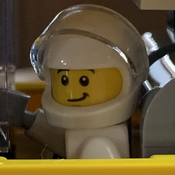 By Abricot68
4 comments
The Renault 5 is a four-passenger, three or five-door, front-engine, front wheel drive hatchback supermini manufactured and marketed by the French automaker Renault over two generations: 1972–1985 (also called R5) and 1984–1996 (also called Super 5 or Supercinq). The R5 was marketed in the US as Le Car, from 1976 to 1983. Renault marketed a four-door sedan variant, the Renault 7, manufactured from 1974 to 1984 in Spain by Renault's subsidiary FASA-Renault and exported in limited markets.
The Renault 5 became the best-selling car in France from 1972 to 1986, with a total production exceeding 5.5 m over a 14-year period, making it France's most popular car.
Total of 285 parts including the minifigures.
Features:
- Rear Opening Hatch
- Two Minifigures