"OH NO, NOT AGAIN" Hitchhiker's Guide To The Galaxy 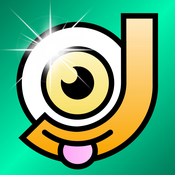 By Ochre Jelly
28 comments
The Hitchhiker's Guide to the Galaxy by Douglas Adams was a comedic sci-fi BBC radio series from 1978 whose popularity over the decades has been sustained by many adaptations, including books, video games, TV shows and a 2005 feature film. It follows the exploits of Arthur Dent, the last living human, as he stumbles through a nonsensical galaxy, guided by an equally nonsensical travelling guide.
For this set, I envision a collection of artistic brick-built character sculptures (not minifigures). I decided to use the more recent feature film as my visual guide, rather than the very old 80s TV show. These would make great desktop ornaments for any HG2G fan!
Featured are the whale and bowl of petunias ("OH NO NOT AGAIN"), Arthur Dent, Ford Prefect, and the computer Deep Thought. Most of whom are depicted falling through space, which not only happens frequently in the show, but is symbolic of the characters' lack of control over lives in a chaotic universe.