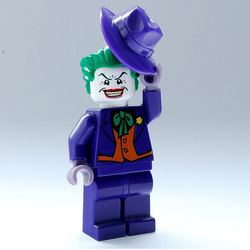 By LoopyGuy
0 comments
This set is based on one of the very first parts in Batman Arkham City, going into the Two-faces Courthouse. The set includes 5 mini figures: Batman, Two-face, 2 Two-face Henchman and a Arkham inmate. The set includes 237 pieces, so it may cost around £20. Like in the video game, the building is split into two colors to match Two-faces color scheme.

The inside of the courthouse has the jury box with Two-faces henchmen on the right, the accused batman on the left, and the judge two-face in the center. On the second floor an Arkham inmate watches over with his Tommy gun.

The judges box with Two-face sitting inside can simply come off if wanted to, and there is also a hidden place to store a gun at the back.

Like in the Arkham city, this set includes all of his gadgets. This includes: the Batarang, the Remote Control Batarang, the Batclaw, Explosive Gel, the Cryptographic Sequencer and the Grappling Hook. Also Batman's cape can expand so he can glide just like the video game.

I put a lot of effort into this set so please support. Also leave in the comments weather I should change or add anything. Bye.