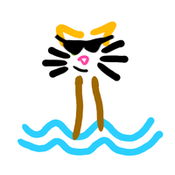 This is a crocodile that can eat any brick except for anything larger than a 2 by 2, so the maximum sized block that it can eat is a 2 by 2.

There is a basket-like object on the bottom of its mouth, as shown in the zoomed-in image of its open-mouthed front. You just put the brick in there and close the mouth, and the brick slides right into the stomach. No food will leak out.

It can also produce waste. If you lift its tail, a hatch at the back will open, and you can dump all the food out. The legs can move forward or back, and the tail can move side to side at three different sections.

I built this because I love building lego with real lego bricks, and because I wanted to try something new and see if I could get 10,000 supporters on Lego Ideas. I believe that it will make a great lego set because it's a cool crocodile simulation toy, it's not hard to build, and because many kids like crocodiles, including me.