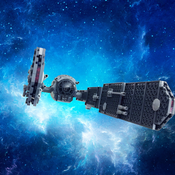 This is not a real Star Wars space ship, it is only and idea for a new TIE fighter type space ship, called "Eliminator".

It has some of the signature TIE fighter elements, such as the front and top hatches, but the prominent wings pointing forwards gives the Eliminator a new and different look. I haven't seen anything that resembles it (it might already exist, but I hope not).

The wings are heavy but are being held up by two long Technic axle pieces on each wing. Though the weight of the wings are the heaviest part of the creation, it is sturdy and fully operable. The design feels well balanced with some really nice lines.

The length of the wing from the front tip to the back tip is 52 cm long. Measuring at the widest part, it reads 17 cm.

The TIE Eliminator comes with one TIE pilot.

This was a fun and challenging build, and I am quite pleased with the end result. Hope you like it!