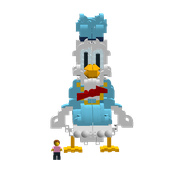 A figure of Disney's Donald Duck, complete with his iconic floppy beret and figure of the designer (that's me!). Donald is the ultimate Disney figure, from his angry nature, to his floppy hat, everybody's favourite duck, finally gets his own full size figure.

Made of over 850 brick, Donald stands proudly and would be the perfect item to sit on any bookshelf, mantle piece or work desk to brighten up even the darkest day. This Lego set would be complete with Donald fact sheet and stand, make the Donald statue a collectible item for children and adults alike. It comes complete with a Minifigure of DanShorthouseDesigns, the chief designer behind the project.