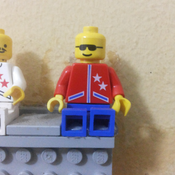 A model inspired in the large and beautiful locomotives, with bricks combinations that make it looks like a real miniature model.
This LEGO has 409 pieces, distributed in the order to create the most realistics details. The wheels can move and has a system of axles that works like the real life. It also has internal detais, a cabin with windows and a control pannel.

The top of the cabin works like a cover, so this way it can be retired and show the interior of the cabin, giving a better view of all the details. The cabin and engine can be removed easily, creating the possibility of a modular build, already the entire model has 4 principal parts.

The colors have been choosen to make the model looks like a classic locomotive, and all the mechanic parts win a cool and unique style.

The creation has been a hard challenge, with a lot of work to give the model the best design! So, the wagons are a future project, to complement that one, already that has the connection in the rear to put a wagon!