By GlenBricker
10 comments
Allons-y! Welcome to the fan campaign for Lego Doctor Who!

NOTE: This is NOT a Nestene plot to take over the world...why would you think that...

Point is Doctor Who fits in every theme Lego has ever produced. It is like the grand unification theory. City, Castle, Space, Miners, Agents, Underwater, even Chima if you go back to some of the older episodes...well, ok, so The Doctor would look a bit weird in Friends, but even then, he is visiting some strange Alien species...

So, please cast your vote to show Lego you want an Official Doctor Who Lego Set.

Our Set Proposal:
As stated, Doctor Who pairs well with any existing Lego theme. So what we are looking for in a set are the elements that are harder to organize and come by. A few parts that have not been molded in the right colors, and of course a few figures.

Just enough content to drop the TARDIS, the TARDIS console, the Doctor, and his Companions into a build for a little flavor, and a few trouble makers to stir the pot.

We are suggesting 5 Minifigures, K-9, and 3 Brick Built Daleks for characters.
For setting elements we are suggesting the TARDIS external (Police Box) and a TARDIS Console.

YOUR ROLE IN THIS
Remember how in "The Year that Never Was" Martha goes around the world telling everyone about the Doctor...and it is critical to saving everything! Well, You are Martha in this scenario. Vote for the project of course, and Vote for your favorite characters in our poll (see bellow) but most importantly, Spread the Word!!! Tell every Whovian. The faster this gets to 10,000 the more likely Lego will produce it.

This project is a collaboration with Kaminoan. 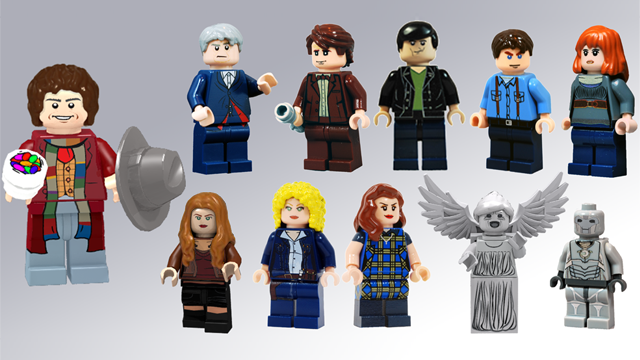 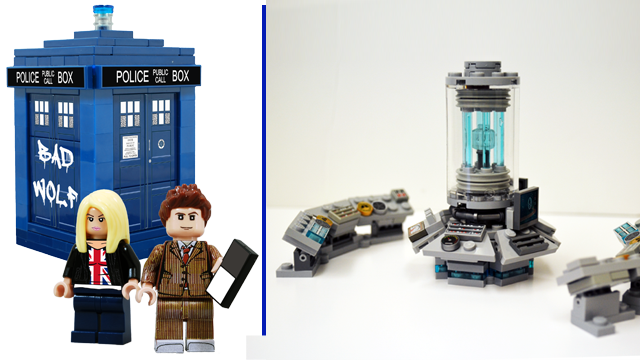 Bottom Left: TARDIS with ALTERNATE Tiles that can be swapped out for a "Bad Wolf" Tardis.
Bottom Right: TARDIS Console based on late Matt Smith run and likely early Peter Capaldi)

We have displayed above several mock ups of possible Doctor Who minifigs. Which figures end up in the set is ultimately going to be up to Lego and the BBC but we want your feedback.

Please go to the Poll (AFTER VOTING HERE! ;)) and give feedback on which Doctors, Companions, and Baddies you would like to see in this set.

The current character in the poll are:

The results of this poll will be used by Lego and the BBC to help pick which Characters get included in the final product.

Only five figures will be proposed but if enough people vote in fast enough there could be a business case for as much as seven. So get going!

Thank you for participating in this campaign!

The Accessories, BEYOND THE SCREWDRIVER

Each Doctor and Companion throughout the history of Who has had an affectation, a token, a item, that is significant. Some are large, some are small, some are critical and others are insignificant.

The characters selected for the set should have some representation of this.
The following list provides our suggestions for which items should be included, IF that figure is in the set.
(Please forgive the discontinuity of the "table." Cuusoo only allows for the barest of HTML) 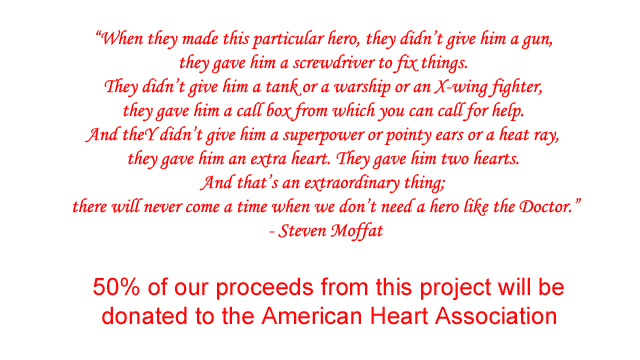 As any true fan of Doctor Who knows, he has two hearts, and the show itself is about a being that is willing to sacrifice himself for the good of everyone. We therefore feel that we must give back as part of this project. 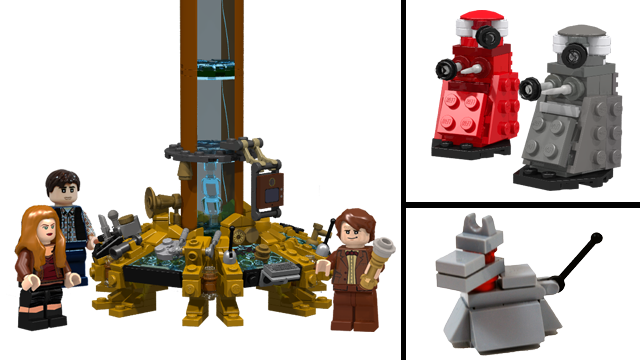 
We have pictured above two different examples of TARDIS consoles but only one console will be in the set. The two provided examples are to give you a good idea of what a Lego design for these might look like.

I assume the BBC Licensing will lean heavily to the most recent design.

While you are on Cuusoo, and ideally just created an account, why not also vote for this other project! It is wheel chair and accessibility ramp for minifigs.

Licensing Conflict with Daleks:
It occurs that the complex licensing issues with the Daleks may allow for Lego to produce a Doctor Who set but may not allow for the use of Daleks.

Ideally this project will include Daleks but I think we can all agree that we would rather have Lego Doctor Who without Daleks than No Doctor Who at all.

Again, please note, this is NOT repeat NOT a Nestene plot to take over the world. That is just silly. Now, go buy some more minifigs...