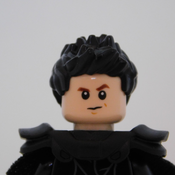 Who doesn't dream of becoming a secret agent and accomplishing perilous missions with a multitude of gadgets and weapons? But it should not be forgotten that a secret agent remains a human being, so he owns a house and a family. This set makes you discover a family house built on a rock. Seemingly normal ...

Access to the house is via a small wooden staircase which runs alongside the vegetable patch. This first floor includes a small entrance hall, a dining room, a kitchen and a living room. In it, the library can be rotated to allow the father to secretly access the basement.

When he descends the spiral staircase, the father becomes a secret agent! On his desk, he begins by searching for information and projects his missions on a large screen in front of him. He then goes into the laboratory part where he prepares potions to put his enemies to sleep. He then has to equip himself with a suitcase and a turnstile to choose the appropriate weapon. Before leaving, he checks the condition of his car. Finally he opens the door camouflaged in the rock and sets off on a mission.

This part of the house is classic and contains the bedrooms and the bathroom. As in many houses, the children's room is overrun with toys and is in a bazaar.

A specific antenna to communicate with his command is hidden in the attic. You can get it out by opening a hatch and pushing two pieces into the back of the house. Under the small roof in front is a reconnaissance drone.

This house was made with Silver42.