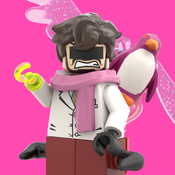 WALLOP with Cuphead and the gang
A Brickheadz 4-pack based off the game "Cuphead don't deal with the devil" a game known for its amazing animation and difficult gameplay. Incredibly popular all over the internet when it first came out in 2017 and still popular to this day even spawning an upcoming Netflix series.
this set includes Brickheadz forms of Cuphead his brother Mugman and Ms.Chalice along with the villainous trio of Cala Maria, King dice, and The Devil, with his Pitchfork in hand ready to deal some damage. This set has 585 pieces and 6 figures.
After seeing gameplay for this game I was entranced by the beautiful hand-drawn animation in each stage and with each character, boss, and enemy as I'm sure most were too and I really wanted to recreate the expertly designed characters in Brickheadz form.
if you have any feedback or a building technique ou think would help this build feel free to comment.
I've got more projects in the works that I can't wait to show
and remember folks, "Don't deal with The Devil"