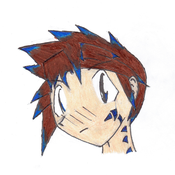 Mecha One always knew that any one of his robot minions might gain self awareness as he did. He knew the discord it could create amongst his ranks. But in all his statistical and systematic genius he could not predict it would be so sudden and have such an extreme effect on the war between man and machine.

And so was realised, Iron One. An Iron Done gained awareness as his commander had already and devised a plan to remove him from the equation of the war. It was to early to carry it out though. Iron One tried to make peace with the humans and wanted to serve them as he was designed to do. He was accepted, but with many conditions. He knew why and took it well at first. after a time he realised he was doing no good locked up in the EXO-Force base as a lab rat. He decided to leave and designed his own battle machine. He destroyed Mecha one and continues to hunt the higher robots that oppose the humans. But he knows a secret of the Golden robots plans that makes him wonder if he really has destroyed his former commander.

PS. This is the beginning of a story idea I have that is a continuation of the EXO-Force theme. Ask questions in the comments if your interested.