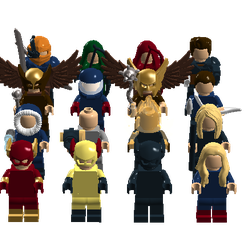 This project is based on The Time Vault which appears in the CW's The Flash. This is a secret room hidden in STAR Labs, where the Reverse-Flash (Eobard Thawne) can communicate between the AI, Gideon and suit up into the infamous arch-nemesis of the Flash.

The set would include the mini figures: The Reverse-Flash and Harrison Wells (Eobard Thawne)