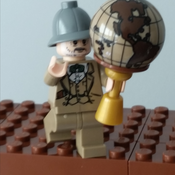 By didivdm
27 comments
This is a 'German/Austrian 19th century Style' pet shop.
I love these old buildings in Germany and Austria so I decided to build one in Lego. As they suit well in a winter landscape, this looks great in a Lego winterland.
I created it to be added to our Lego winterland which we put up for Christmas time. As many people do these days a Lego winterland is a great alternative for the traditional Christmas tree. Or a great addition to it.
In front of the shop children are playing and throwing snow balls at eachother. And an old lady is feeding her dog a dogbiscuit she just bought in the shop.
As an interior I chose a pet shop on the ground floor. Selling fish, a parrott, and many other animals. A puppy has just been sold to a little girl.
On the first floor I chose an 1970's interior with leather chairs and a wall clock. As the owners are an old couple this looked suited to me. The couple's bedroom is made in the same style.