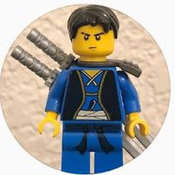 By JaminStar
89 comments
Here is my redesigned Fort Iron Cactus! It is my interpretation of an Old Wild West Fort. Inspiration for this comes from a mix of the LEGO Western theme & Ninja themes.
I incorporated feedback and suggestions from my original submission last year. The base is 64 x 64 studs, and has been built up one block thick to accommodate hinges to allow the fort to open up. The fort itself is now 26 x 25 studs. The original digital build had around 2,100 pieces, not including minifigures or the two horses, this submitted version has slightly fewer as some pieces were removed during the refining of this design.
The fort is three stories tall and made with a modular technique to allow it to separate into 8 different sections plus the base. The base is hinged to allow it to swing open. The top level has four panels that are hinged to allow an opening for four cannons. The top level also has a lookout tower with a rotary stud shooter and the fort's commander's office/living quarters. The second level contains the bunkhouse for the officers and a walkway that wraps around the fort. The ground level contains the armory, jail cell, chow hall, and the bunkhouse for the enlisted.
There are three groups of minifigures in this project: enlisted in the light blue uniforms, officers in the dark blue uniforms, and of course three bandits.