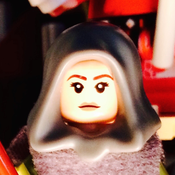 ”I eat ABBA! I drink ABBA! I sleep ABBA!”, an excited ABBA fan exclaimed during the famous pop group’s celebrated tour in Australia 1977. Now fans all over the world could get the chance to build ABBA - with LEGO bricks. And not only the group members as minifigures, but actually their songs and other things related to the group.

This proposed set consists of the four letter A, B, B, and A taken from the initial letters of Agnetha, Björn, Benny and Anni-Frid. (Only the first two are shown on the cover image to make it less messy.) Each letter is filled to the brim with references to the music of ABBA and can serve as a quiz for any fan. Some obvious examples are Money, Money, Money which can be found in Agneta’s A and the Eagle on top of Benny’s B. But there are also some challenging details which both require a lot of ABBA knowledge as well as some reasonable imagination. Why does the reporter from The Album cover wear a red bandana? And where does the balloon come from?

For those who are not (yet) that much into ABBA, e.g. a lot of children, there are many fun details and some moving parts to play with, such as the marionette-like Anni-Frid which can be turned by a ball on the back of her candy-like A.

Build and play the ABBA LEGO quiz, enjoy the fun details, and have it on display among your ABBA albums!

If you like this idea for a set, you might also want to check out the ABBA Arrival set proposal.

Hasta mañana ’til we meet again!