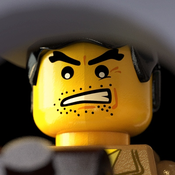 A fun platform based Lego board game that can be built and re-built in different configurations as per the player’s preferences. For 2-4 players of any ages.

The concept behind the game is that it is completely modular, any number or obstacles can be placed along the way and players can add their own twist on the game as they wish.

Rules of the Game

There are four characters to choose from, Pink, Blue, Orange and Purple. Each character starts on their corresponding coloured brick at the lower left hand side of the board.

Each stud along the board represents one move as per the number on the dice, i.e. if your roll a four, you move your chosen character four studs along the board. The game moves initially from left to right along the green path snaking up to the top of the board, finishing at the top left.

There are Coins (Gold 1x1 Round Plate,) to be collected along the way. The player must land directly on the coin to collect it, for example if he/she rolls a six but the coin is four studs away, he/she cannot collect the coin. If a coin is collect it is to be connected to bottom of the players chosen character.

There are also Questions to collects (Yellow 1x1 Round Plate.) Again the play must land directly on the question to have a chance of collecting it. If the player lands on a question and correctly answers the Lego based trivia question on the card, the player connects the question piece to his/her character.

Along the course there are Pillars (grey brick) to jump over, if a player lands directly on a Pillar he/she must role a six to get down or forfeit the bottom Coin/Question they have collected.

There are also Guards along the course, if a player lands directly on a Guard he/she must forfeit the bottom Coin or Question they have collected. If the player doesn’t have any Coins or Questions collected he/she must go back to the start of the course.

The path of the game can be reconfigured based on the user’s creativity.

Pillars, Coins, Questions and Guards can be placed anywhere along the board and the amount placed can make the game easier or harder as desired.

Thanks for looking and supporting. I’m sure there will be updates to come so keep watching.

If you like these please check out my other designs.