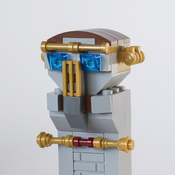 By ghostlayer
10 comments
Leaving room for imagination
This set was designed as a tribute to Fumito Ueda's video game Trilogy. It was not designed from one particular video game but loosely interpreted from theses incredibly inspiring games universe.
I tried to convey the same feeling of mystery that comes around Ueda's game. What are those two statues standing for ? how does this work ? What civilization does it belongs to ?
This idea was to leave room for kids imagination. As a father of two, I was delighted to see my older daughter playing with it, and putting her minifigs inside of it or even buidling some new set extensions.
I hope you'll enjoy it as much as I had pleasure building it.
Dimensions of the shrine : L = 305 mm / W = 145 mm / H = 130 mm