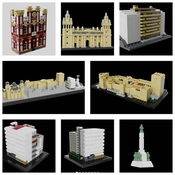 Diesel-equipped Nissan Patrol rally truck finished in the top ten in the 1987 Paris-Dakar rally. Known as Nissan Fanta Limon (lemon), is now becoming a classic. These days, a group of engineers is making this car alive again, so I think it is a good idea to make a Lego homage to this people. I wanted to make a big enough model to to have working doors and a full interior (well, it's a rally car, the interior is not very comfortable after all).

It would be a great model to take to the sand and feel yourself like a Paris-Dakar driver, with a retro eighties touch!