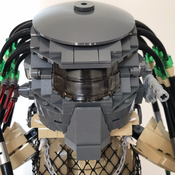 By WestCoastBuilder
17 comments
This is my Lego interpretation of a Martian Fighting Machine from "Jeff Wayne's Musical Version of The War of The Worlds". I bought this album in 1978, it's been a favourite ever since.
Based on the famous HG Wells story & set in Victorian London in 1897 the album tells the story of the Martian invasion of Earth. This musical version is hugely popular with over 15m albums sold, multiple arena tours and a huge and loyal fanbase.
Described as "Monstrous tripods, higher than the tallest steeple" & "Walking engines of glittering metal" the ruthless martian invaders used these machines to wage war on Earth before being halted by
I've always enjoyed creating Sci-Fi themed MOC's, so last year I started trying to build a fighting machine, I then built up 4 scenes from the album. I've displayed at Lego shows across Scotland as well as at ComiCon Edinburgh, at all the shows I've had a tremendous reaction from visitors of all ages.
People instantly recognise the iconic shape of the Tripod fighting machine, many having seen the films or TV shows or know the album (often from parents) or having seen the live shows. Aside from the existing fans, I feel Lego fans will enjoy the build and there is an opportunity to extend the build & play experience by creating your own invasion scenes.
For all my MOC's I prefer to work from pictures and lots of good old trial and error!
Here my design is based on the original album sleeve artwork and is a combination of System and Technic elements.
There is a little know Lego connection to the album..in 1969 a Lego radio advert featured the Jeff Wayne melody from "Forever Autumn" which was one of the most popular pieces on the album and released as a single reaching the top 5 in the UK..
If you're a Jeff Wayne fan I'm sure you'd love to display a fighting machine, and if you've never heard the Album, hopefully my MOC will inspire you to have a listen!
I really hope you like my build and will support me by voting, or as the Martian's would say..Uuulllaaaa!!
Thanks
Gordon Finlay