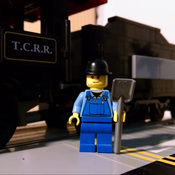 As the kind of model train enthusiast I am, I have come up with 4-6-0 steam locomotive with some what accurate details. This train includes; airbrakes, a detailed cab with seats for engineer and fireman, I have also geared together the drive wheels causing for smoother operation while running. The tender behind the locomotive is large enough to hold and hide power functions, the motor being one of the two train wheel sets under the tender. 4-6-0 locomotives were used for light speedy passenger trains that were often faster and was most often used for heavier freight loads that the smaller locomotives could not handle. On any Lego layout this locomotive can be a museum peace or old west antique that runs on special days on a small tourist railroad. To double the fun you can get two locomotives and create a double header (two steam engines at the front of a heavy fright train) to haul a reasonably long train (4-6 train cars or more depending on the strength of the train motors).