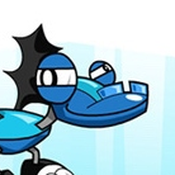 This is the light catcher. I had said that is the black rarely animal because you can be confused with a crystal or a machine. This animal is not comon. You can say that is a monster. He uses a kind of optical fiber to take the light and put it inside him.  This special animal appears in the second chapter of the book: Rarely unknown animals. By J. D. A. A.(me) This book will appear in two years.

This model has exactly 237 bricks including two light bricks. If you move the sticks the light bricks turn on. It has glowing teeth, two tongues and one light brick in the mouth.

I had made this Lego model because want to publish to the world this rarely animal some years before publishing my book.

I think that is a good idea because it has 20 mobile parts. So, it is good for play and make some poses. This model is not based on a one existing thing. So, you can use your imagination including more than humanoids, real animals, stories and objects.