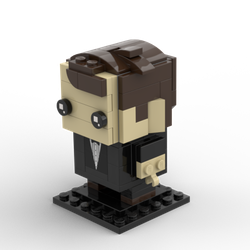 Agent 14
13
Has anyone of you Imagine Dragons fan heard the album, Smoke+Mirrors? If you have seen the album picture, it is two hands tied together with a ribbon, and a bird falling. I decided to make a set on that, but instead of human hands, I put in the Lego style! Click here to see the original album cover. I tried doing a bird, but it was going to be hard balancing, so I decided to replace it with a snowy owl Lego piece.
My design has 406 bricks, not counting the base plate. The base plate is a transparent 48x48. Imagine dragons fans could collect this, and maybe even stand their album on the sides!. they can even store in the depression in the middle of the hands.
13