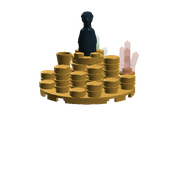 Behold the Fortress of Fury! From his dark lair, Havok, Lord of Fury prepares to unleash fury upon all kingdoms! Prepare for war with two forges, spy on his enemies with his crystal ball, and repel all attacks from behind his nigh-impenetrable walls! Includes 6 minifigures-from left to right: Havok, Lord of Fury

The Fortress of Fury contains 999 pieces.

This is the first installment of 3 fortresses of evil lords. Be on the lookout for the next fortress...

...The Fortress of Pestilence, abode of Toxik!

Support to fund his campaign for world domination!

P.S. (For the Lego Group) I have included pictures 9 & 10 to show the two trans-red 2x4s. If this became a set they would need to be switched out for light-up bricks to illuminate the forges. Thanks!