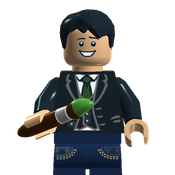 The A-Team is an American action-adventure television series, running from 1983 to 1987, about a fictitious former United States Army Special Forces unit who, after being court-martialed "for a crime they didn't commit", escape from military prison and, while still on the run, work as soldiers of fortune.

The A-Team was created by writers and producers Stephen J. Cannell and Frank Lupo.

The perfect adventure theme for LEGO to sell. This is simple, just the 1983 GMC Vandura cargo-van G-series that the team uses throughout the series.

This set will include: