The Inn of the Prancing Pony 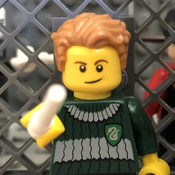 By ZardBricks04
66 comments
what is this build?
The Prancing Pony is a location In the Lord of the Rings Films and books as well as the Hobbit, The Prancing Pony is an inn located in Bree which is just east of the Shire this approximately 700 piece build recreates that inn with the first floor showing the bar and restaurant area with multiple seats to create scenes with the given minifigures of this set or create your own scenes either from your imagination or The Lord of the Rings or The Hobbit. The second floor shows a Hobbit sized room which can create many scenes like the other Hobbits barging in to save Frodo from strider or have the Nazgûl cut up the sheets by turning the built in function to cut up the sheets. The final floor shows the attic with many accessories that the Prancing Pony has collected over the years, this section has my personal favourite part of the build the roof, I really enjoy the tile pieces that create a nice design on the roof. additionally this build has 8 minifigures to decorate the build to create scenes from the films and books as well as being able to create your own scenarios with these minifigures which include, Frodo, Samwise, Aragorn, Pippin, Merry, a Nazgul on its horse, a Prancing Pony patron, and Barliman Butterbur the owner of the Prancing Pony.
Why I chose to build the Prancing Pony?
I love Lord of the Rings and I love lego and I really enjoyed the Lego Lord of the Rings theme so I wanted to build something that was from middle earth but I also wanted to build something that Lego never made when the Lord of the Rings theme was releasing, so while I was watching the extended editions of Lord of the Rings because come on there is really no other way to watch it, I decided upon the Prancing Pony, so I got to work and drew out a sketch of how I thought it might look like and like every lego set I began building and after a couple weeks I had a model that I was happy with and I really felt it could succeed on Lego Ideas.
Why the Prancing Pony would make a great Lego set?
The idea of getting another Lego Lord of the Rings set is a very popular one, as seen by the numerous amount of Middle Earth projects that have reached the 10,000 supporter threshold on Lego Ideas proving that there are still many fans of Lord of the RIngs who would be ready to add a Lego set to there collection for both play and display, not only that there is also the upcoming Lord of the Rings the Rings of Power show which will bring new fans into the wonderful world of middle earth. This Prancing Pony model walks the line of play and display by adding function but not compromising the design of the set this allows for a wide variety of possible customers for this set not only that but this set can also work for any lego fan who has a lego city and medieval village with its exterior blending in to many landscapes. This set is something that I really enjoyed making and was very proud of and I believe it would make a great addition to the Lego ideas theme
Thank you to everyone who read this description and considered supporting this project, this was my first project that I felt really proud of and I felt it had a chance of being made and every supporter makes it one step closer to happening so Thank You!
"We wish to stay at the inn. Our business is our own" - Frodo Baggins