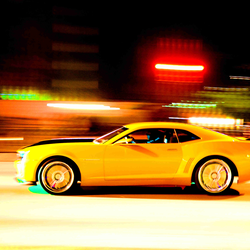 This is my 5th generation Chevrolet Camaro SS.  I have submitted it to Lego Ideas, because I have always wanted Lego to produce a scaled version of this iconic musclecar.  Ideally, it would feature the yellow-with-black-stripes paint scheme and as many realistic functions as possible for this given scale.  This particular model I have submitted features an opening trunk and hood, as well as a highly detailed interior and engine compartment.  All of these things are based off of pictures of a real Camaro.  Creating this model forced me to employ several complex building techniques, including the use of hinge plates and angle plates (the ones that allow to build sideways).  This would be a good set to produce, because the Chevy Camaro is considered to be an American icon and it simply is a beautiful car.  :)