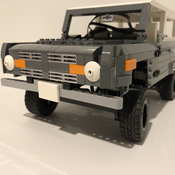 Another day at the lunar base, with astronauts busy with surveillance while a droid conducts routine repairs on the outpost. Preparing for takeoff is the all new X7907 Valkyrie, poised in the new white scheme. The ship is used for lunar defence as well as surveillance of surrounding planets, thanks to its electromagnetic drive system (uses the magnetic fields of planets to fly) that allows the ship to travel at extremely high speeds. An astronaught is taking a rest inside the base, while another astronaut is busy designing spaceships on the base's computers.

This action-packed set is full of detail and space fun! The spaceship features retractable landing gear, space for one classic space minifigure astronaut, unique build designs, as well as the classic black-yellow-black no-step paint (3 1x2 plates) on the wings. The lunar rover has simulated suspension for traversing the rocky lunar terrain, as well as a cup holder and stun blaster in case of an extraterrestrial attack. The classic blue and gray space base is loaded with computers to track spaceships, record surveillance data, and recieve transmissions. The base also contains two beds, storage bins and compartments for tools, oxygen tanks, and stun blasters. The exteririor of the base is decorated with detail, from exaust pipes, antenna, random pipes and vents, siren, speakers (for jamming to classic rock in space), as well as an opening air-lock door with key pad. Combined with the brick lunar terrain, this classic-themed space set looks great as a desk display, but provides even more fun for playing out lunar adventures!

Your support is greatly appreciated!