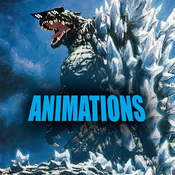 By Reptilian Animations
6 comments
Hi, it's Reptilian Animation Studios here and today I'll be showing you my very first Lego Ideas project.
What is it?
It's a small model of Kamata-Kun, an amphibious creature that is an early evolution stage of Godzilla: the world's most famous monster and kaiju. It's length from head to tail is approximately 25 centimetres (about 9,8 inches).
My model is based on the movie Shin Godzilla, also known as Godzilla Resurgence (2016) by TOHO.
Why did I build it?
I built it because I'm a Godzilla fan and I would really want Lego to produce a Godzilla set. I also like making short Lego stop-motion films, and this creation is very suitable for stop-motion. Building this one was very entertaining for me, because I was able to recreate this famous kaiju in Lego very well.
Why do I believe this would make a great LEGO set?
I think that a lot of people all around the world would really like to buy this set, because it's very accurate to the movie, yet it's quite small and easy to build. It has got movable legs, arms, tail and head. Kamata-Kun is loved by a lot of kaiju fans.