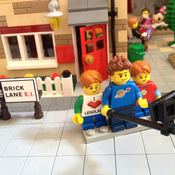 Toy Story - "To infinity and beyond"

A little boy named Andy loves to be in his room, playing with his toys, especially his cowboy doll named "Woody". But, what do the toys do when Andy is not with them, they come to life. Woody believes that his life (as a toy) is good. However, he does have to  worry about Andy's family moving, and needing to make sure he and all his friends manage to move safely by getting a moving buddy but before the day of the big move, Andy has a surprise birthday party. What Woody does not realize is that Andy's mother has a special present for him, a brand new Space Ranger action figure known as Buzz Lightyear. Buzz isn’t like the others and does not believe that he is a toy, he quickly becomes Andy's new favourite toy taking woody’s place. Woody, who is now consumed with jealousy, tries to get rid of Buzz. Then, both Woody and Buzz are now lost. They must find a way to get back to Andy before he moves without them and they are lost forever, but they will have to pass through a ruthless toy killer, Andy’s next door neighbour Sid before they can get back to the safety of Andy’s Room.

To help celebrate the 20th Anniversary of "Toy Story" and with the upcoming release of “Toy Story 4” I decided to take Woddy, Buzz and all their friends back to where the adventure first began to Andy’s original bedroom.

With this set of “Andy’s Room” everyone will have the ideal place to start their very own Toy Story adventure with their favourite Toy Story Mini figures “Woody, Buzz, Ham and Rex” along with some “new” brick built classics like “RC and Mr Potato Head”.

I’ve tried to include as much detail as possible using standard Lego elements along with some custom printed pieces to give the set an authentic look of Andy’s original Bedroom.