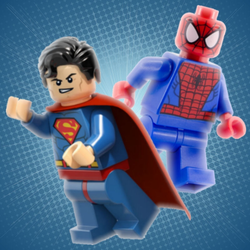 Horvath and Drake have stolen the magical Grimhold and are escaping! It's up to Balthazar and Dave to catch up to the evil sorcerers! Race through the streets in Balthazar's antique car to retrieve the Grimhold before it's too late!

The Sorcerer's Apprentice is a 2010 Disney live-action fantasy-adventure movie. Loosely based on the Fantasia cartoon short of the same name, the movie tells the story of modern-day wizard Balthazar Blake, training college student Dave Stutler as the titular apprentice.

This set is designed to recreate the scene from the movie in which the villains, Horvath and Drake, have stolen the magical Grimhold and are pursued by the heroic Balthazar and his apprentice, Dave.

Included are two vehicles: Balthazar's antique 1935 Rolls-Royce Phantom, and Horvath's sleek, modern Ferrari F430. I extensively researched each vehicle to make them as accurate as possible to the cars seen in the film, right down to the screen-accurate license plates. Balthazar's car has a classic-style, black and grey construction, while Horvath's car has a smooth, nearly all-black design. Each car has two seats, side by side. Inside Horvath's car I attached the seats with jumper plates so they would not take up as much width as usual for side-by-side seats.

The set includes four minifigures and a dog. Characters included are Balthazar Blake, the sorcerer; Dave Stutler, the apprentice; Maxim Horvath and Drake Stone, the villains; and Tank, Dave's dog.

In my opinion, even people who are not fans of The Sorcerer's Apprentice could appreciate this set because of its inclusion of both a modern and a classic car. Each car is a very different style, and can each carry two minifigures.

If you like this set and would like it to get a chance at becoming an official LEGO product, please click the green "support" button. Thank you for reading!