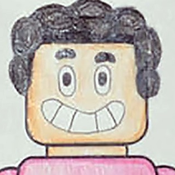 This set is based on the Cartoon Network TV show: Steven Universe!

The top three minfigures are Gem warriors named Garnet, Amethyst, and Pearl.  The boy at the bottom is named Steven Quartz Universe: a human-gem hybrid who is still learning how to use his gem powers like the other Crystal Gems.  A minifigure of Greg Universe, (Steven's dad) is also included.

This set is based on the episode "Laser Light Cannon", in which Greg found a powerful Gem cannon in his garage to help destroy a giant Gem eyeball in the sky!

This set also comes with stickers for the decals on the side of Greg's Van, the license plate, and the design on Steven's shield.

I worked very hard on drawing the minifigures and decals and perfecting the Lego models, so I hope you all like and support my first Lego idea!