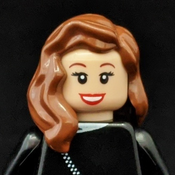 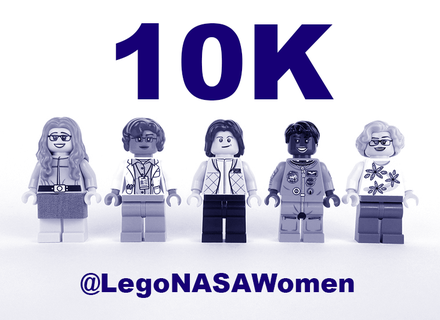 Huge round of applause to all who supported, covered, and cheered for this set.

What happens next? An official LEGO Review. We should know by January whether LEGO will produce the kit in stores... In the meantime, I'll continue to post updates and factoids about the five Women of NASA on the project's social media accounts, so please keep in touch!

Thanks again, everyone, and don't forget to — in the words of Sally Ride — always reach for the stars! 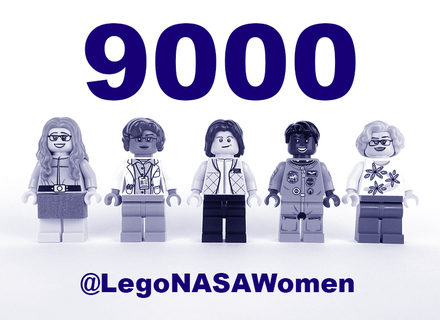 This morning we passed the 9,000 supporter mark, and I'm thrilled to see votes continuing to come in at a fairly rapid clip as we approach the final goal of 10K.

Thanks again to all who have supported, cheered, and shouted from the rooftops on behalf of the Women of NASA! It will be a dream come true if we can get this to LEGO Review, and potentially to stores around the world. 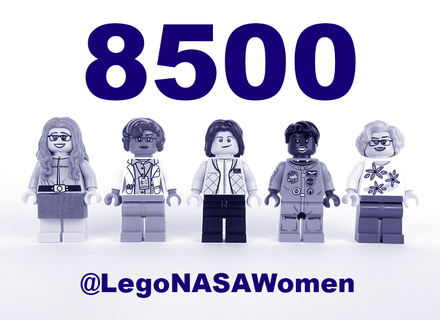 It's been extremely exciting to see how quickly support has taken off for this little project, so to all of you who've supported the Women of NASA set, I can only say: THANK YOU. To all who spread the word on social media or by word-of-mouth, THANK YOU.

The steady stream of media coverage has also been an enormous help, so thank you also to the many reporters and outlets around the world that covered this set – especially those that encouraged readers to come on over to LEGO Ideas and vote. At some point I will compile a full list on my personal website, but for now, you know who you are! I will note, however, that the following from The New York Times' Women in the World might be my favorite headline ;) 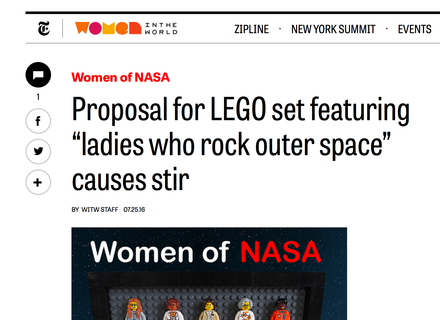 I was planning on doing this later on, but in the event we secure the final 1,500 supporters in the next few days, I'd like to take a moment to mention some of the changes/additions that I hope to see with this set if we're lucky enough to have LEGO make it:

1. HAMILTON: I'd love for LEGO to recreate the outfits of both Hamilton and Johnson as seen in vintage photos from their early days working for/at NASA. For Hamilton I'd recommend a torso that could made to look like it connects with her skirt, which I kind of like having in cloth. Of course, her legs need proper shoes. One additional change might be to recreate the actual color of her dress; I chose gray to mimic the black-and-white of her iconic photo, but I might reach out to Margaret and ask if she could tell us the actual color! If we did that and it turned out to be a bright color, I could see updating the books of code so that they're closer to their actual white/off-white. Finally, I will definitely fact-check the code on the sticker (which is meant to be a blackboard). A tiny addition that would make my heart melt would be to add a collegiate MIT pennant to the wall somewhere.... While Margaret's coding work for the Apollo program was done under a NASA contract, she was technically employed at the time by the Massachusetts Institute of Technology (which — full disclosure — is where I work).

2. JOHNSON: Katherine is also wearing a dress in her vintage photo, but that would need to be printed on b/c you can't have her sitting at her desk with a cloth miniskirt. (I tried; it doesn't work.) I'd probably just keep her in pants but make the top a short-sleeve shirt like in her photo. In her office, I added the computer equipment (courtesy of Citizen Brick) to give it color, but I would want designers to refer to actual equipment from the time of her photo to make sure it's historically accurate. Similarly, her desktop "computer" is probably too modern, so ideally it would get buttons that reflect the calculation machine(s) she might have used in her early days at NASA. Finally, I think the globe may actually be a moon globe in her photo, so I'd want to double check and make it what she really would have used.

3. RIDE and JEMISON: I'm pretty happy with the shuttle and rockets setup, but I'd like to reconsider Sally's outfit; I didn't want to give her full astronaut gear since much of her career was spent as an educator/entrepreneur, but I think it might be nice to show her in the blue NASA astronaut jacket that she often wore at workshops and other outreach events. Jemison's space flight jumper (courtesy of Minifigs.me) is pretty close to the real one but would need to be updated for whatever Mae actually wore.

4. ROMAN: It would be great to have a few sticker options so kids could select from several different Hubble images to put on the display behind Roman. But I'd also like to update her shirt so that it has some kind of astronomical object or other tribute to the cosmos.

Thanks again, everyone! Here's hoping we'll get to 10K very soon.

Selecting the Women of NASA 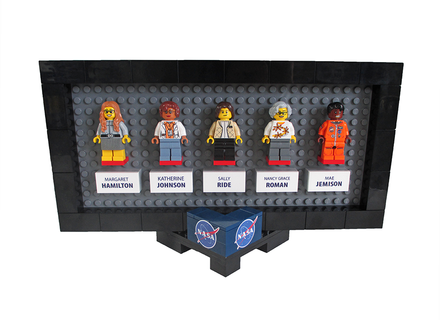 Hi everyone! I've had so many wonderful suggestions for additional minifigures to add to this set that I thought I'd write a special update on my thought process for selecting who I did.

When I began this project, I set out to reflect a wide range of contributors to NASA's mission. With that in mind, I started making a list of some of the most iconic NASA women, as well as key contributors who may not have historically gotten the recognition they deserved. I then whittled down the list until I had my five.

While many here on LEGO Ideas and on social media have suggested adding extra astronauts, it's important to know that around 75 women have trained and/or flown in space. There's simply no way I can include all of them, or even just all of those who made special achievements, "firsts," or — in at least four cases — the ultimate sacrifice of their lives. And while I recognize there are amazing astronauts representing countries outside of the U.S., I decided to honor NASA mainly to keep things thematic. Sets that are bound by a very specific theme do well here on LEGO Ideas . . . "Women of Space" could have been fun, but the umbrella would have been so huge that it might not have been quite as meaningful.

Another consideration was that I didn't want this set to focus solely on space travelers. I designed it to also honor and recognize some of the women who've been underappreciated for their critical work behind the scenes, as computer scientists, as mathematicians, as engineers, and more.

In addition, space flight is only one of many areas within NASA. As you probably know, the agency also has divisions covering astronomy, Earth science, planetary science, and solar physics. So while it's true that the focus in my set is on women who've supported human space flight in one way or another, I also made sure to include one who was both an astronomer and a key leader in the planning and execution of one of our most important scientific instruments: the Hubble Space Telescope.

Finally, I really wanted this set to reflect some of the diversity of cultures, backgrounds, and ages represented in NASA's workforce. Representation in toys and kids' media is very important, and this project addresses that head on.

To be sure, it bears remembering that these are all editorial decisions of mine: NASA has played a significant role in my life, so honoring it was a personal choice. The stories of the women I chose have resonated with me. But of course, there are thousands of women who've made critical contributions to the history of space exploration... If your favorite astronaut or scientist or engineer is not represented in my set, I encourage you to propose your own set(s) featuring women in space or other STEM industries; the more the merrier!

At the end of the day, while this project features five individuals, the spirit of the Women of NASA set is meant to honor all women who've contributed in some way to the agency's mission of advancing society through space exploration. I hope you enjoy it, and I hope you'll all get to make it your own in the near future! 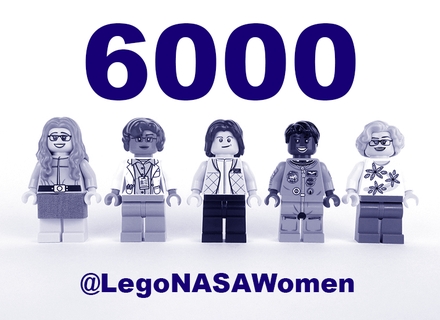 Yesterday we passed a critical milestone, the halfway marker of 5,000 supporters. This gives us another six months — now a total of two years — to reach 10K. And today we've just passed 6,000 votes!

Media interest in the Women of NASA set has been pouring in: The proposal has been covered widely, not only in the U.S. but in Canada, France, Germany, and more. I'll compose a proper list soon, but suffice it to say: THANK YOU to all who have spread the word about this project!

In the past couple of days the set has also enjoyed shoutouts from a number of celebrities, from astronauts Mike Massimino and Leland Melvin to entertainers Pharrell Williams and Janelle Monae. Thanks again, everyone!!! Your encouragement means a great deal.

Next up, we set our sights toward the 7,000-supporter mark. I'll also be posting an update later this week on my thought process for selecting the women I did for this set, so stay tuned!

And don't forget you can follow along on social media for additional updates: 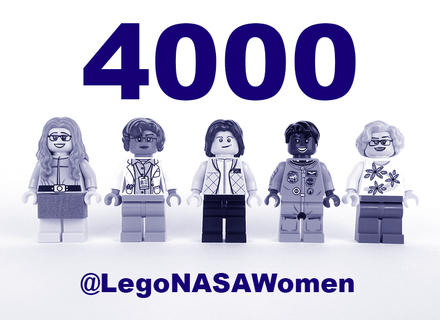 Simply amazing to be at this point just one week in. I've got nothing but appreciation for everyone who continues to vote for and comment on the Women of NASA set.

I'm collecting media mentions for a future post, but for now I'll simply note that entities from NASA to the United Nations are talking about this set, so we must be doing something right ;) 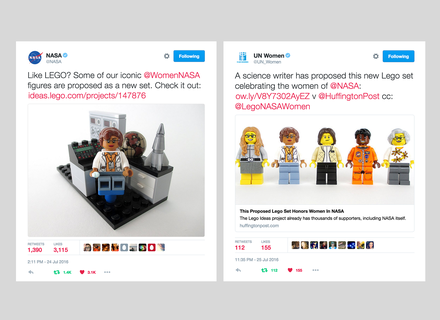 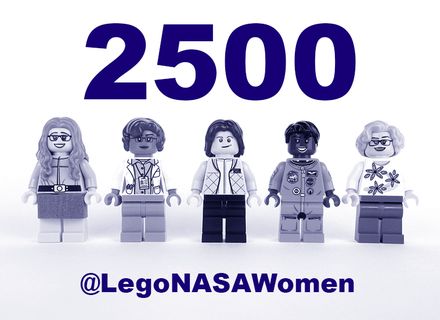 Wow! I'm thrilled that after less than a week online, the Lego NASA Women project has already passed the 2,500-vote mark — a quarter of the way to our goal of 10K. What a remarkable result . . . Thank you to everyone who has voted so far!

I also wanted to give a shoutout to all of the media outlets that have supported our efforts with articles or blog posts since the last update: 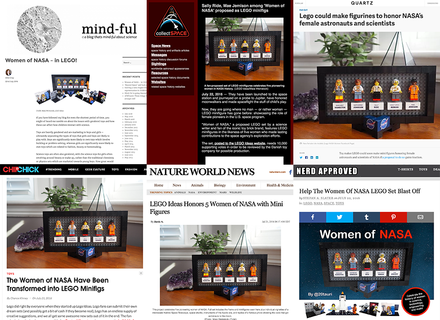 700 Supporters, Project of the Week 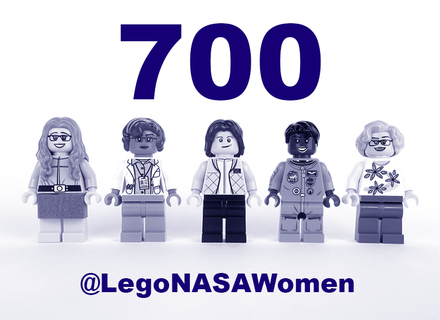 Thank you, everyone, for your early support of the Women of NASA project! In just a few days since launching, we've cleared the 700-vote mark, and in so doing have become the most popular project on LEGO Ideas this week. Woohoo! 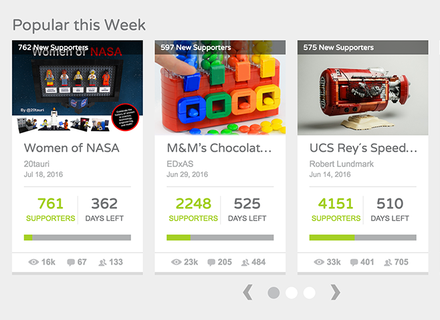 Thank you also to The Mary Sue and Popular Science for articles about the set. 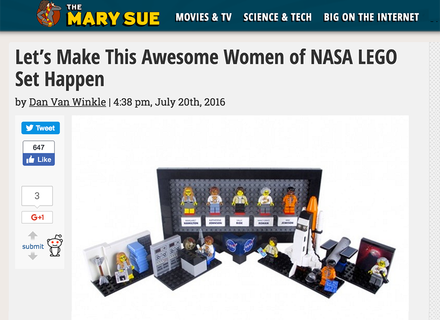 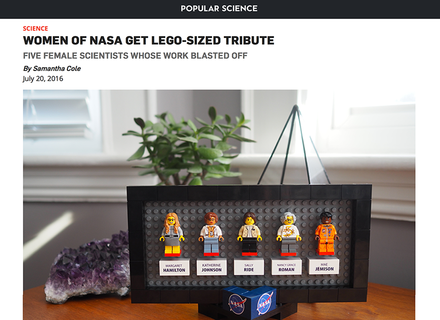 There will be lots of Women of NASA goodies for you in future updates, so check back often as we make our way to 10K!