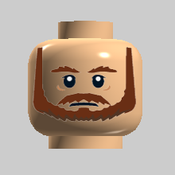 introduced into British public service in 1980, it was designed to run on existing tracks at greater speed by tilting the train into corners so no lateral effects were felt.

The model keeps to the 6-wide, 5-high rules of Lego® trains yet manages to fit the Lego Power Functions® into the front car and tilt technology into every carriage. The is no special bricks and all are real and can be easily found.

The nose can easily be opened to allow access to the drivers compartment and there is plenty of room in the other carriages for buffet, passengers and storage for hours of fun.

What is passive tilt? Unlike the real APT that sensed the speed and steepness of the corner and titled the train to optimum angle so that no lateral movement was felt, passive tilt uses the angle of the bogies and carriage to tilt the train. This is now in its second design after the first bogie design created too much drag.

Sadly the real APT was troubled by political, media and technical issues and was pulled out of service in 1984, but the APTs legacy carries on and the titling technology still lives on in today's Pendulino trains.

Lets carry on this legacy. Please support this project and get the APT with titling carriages into Lego® Trains.