Dragon of the Sea 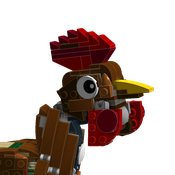 The Dragon of the Sea is a ferocious creature; it has the teeth of an alligator, the high-speed swimming skills of a shark, and even the ability of short (but spontaneous) bursts of flight, so much that some have taken to calling it a 'dragon'. It is actually a type of fish (with six eyes) but no one really cares THAT much about the details, right?

I made the sea dragon because I wanted to make something cool, but different as well. It looks quite a lot like a dinosaur, I realize, but nonetheless it is very awesome.