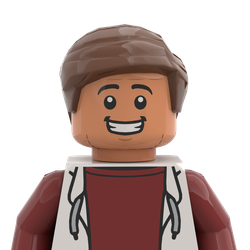 By Dimi4
25 comments
This is my first project. The type of this train is an M61 diesel locomotive. It's name is Nohab. Most of these types of trains run in Hungary. The company that manufactures it was founded in 1847 by Carl Olof Holm. In 1865, they made their first steam locomotive. M61 specimens arrived in Hungary after a tender announced in 1960. After the trial period, a purchase a series of twenty pieces was made. The reliability of locomotives is far and wide known, they are still used regularly from Sicily to Norway.
I'm a big fan of Lego train sets, so I tried to do one myself. I enjoyed the challenge, it felt good to put together my own set. Especially because it's my favorite train type. I love the beautiful red color and the white stripe. It has a nice shape and form. I think that would result in a great Lego set because there are plenty of options in it and I think that’s good too. My goal is also to show this train to as many people as possible.